GoogleX developers are not only making computers wearable and cars driverless—they’re also using their expertise to help diabetics keep a watchful eye on their health. project co-founders Brian Otis and Babak Parviz detailed their new invention just over a week ago. The contact lens uses processing chips and a glucose sensor that have been specially miniaturized for the task, so small that they look like flakes of glitter. Next to them lies an antenna thinner than a human hair. The sensor detects glucose levels in the wearer’s tears, taking readings once per second, and the antenna transmits its findings to an external device. 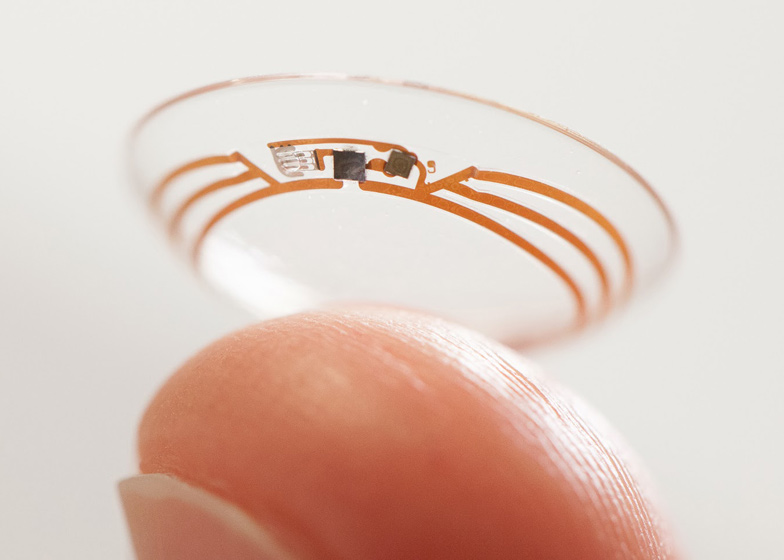 This bionic sensor could make a real difference in quality-of-life for diabetics, who have to monitor their blood sugar levels throughout the day.

According to the International Diabetes Federation, more than 1 in 20 people have diabetes today, and that number is expected to rise to nearly 1 in 10 by 2035. Diabetes leaves people unable to regulate their own blood sugar, so they have to check their levels many times a day and take the sugar-regulating hormone insulin as needed. For most people, this test consists of pricking a fingertip to draw blood, then putting a drop of blood into a testing device. It’s painful and time-consuming, so many diabetics don’t check their blood sugar as often as they should. Without regular checks, blood sugar levels can rise or fall to extremes, putting patients at elevated risk for gangrene, kidney failure, blindness, and premature death. Cutting-edge bionic implants can now measure blood sugar continuously, but getting an implant is invasive. Implants are also expensive and can be difficult to remove.

“There are a bunch of sensors out now, which go under the skin and connect with insulin devices such as insulin pumps,” said Robert Rapaport, M.D., Director of Pediatric Endocrinology and Diabetes at the Mount Sinai Kravis Children’s Hospital, in an interview with Healthline. “Any advance on this would be quite welcomed.”

Google’s new contact lens, which is painless and easily removable, could change everything.

Otis, an expert in miniaturized electronic systems, has long been fascinated by the challenge of making chips and sensors as small as possible.

To develop the contact lens, he and his team stripped glucose detection hardware down to its bare essentials: two chips, a glucose sensor, and an antenna. In some cases, they had to design new chip-manufacturing tools just to build the components small enough.

Rather than mounting the chips on a traditional fiberglass board, Otis embedded them in an ultrathin plastic-like film. The film was then sandwiched between two layers of soft contact lens material, with a small pore over the glucose sensor.

The eye naturally generates tears over the course of the day to keep the eye moist and healthy. These tears leak into the pore in the lens, allowing the sensor to read their glucose content. From there, the antenna can transmit a signal to a smartphone to tell the lens wearer his or her glucose reading.

It’s never been easier to order contact lenses. Simply fill out our online form and the team will be in touch to confirm your order. It’s as easy as that!